If you can't find what you're looking for... please contact us

Have you ever watched a Mediterranean having a conversation? Much of what they say is emphasised or underlined with expansive use of the hands. It’s like a ballet – choreographed to perfection, telling a story of its own!

That’s the world of body language – where movements and expressions can speak on your behalf, either confirming or contradicting what you are saying.

Being able to interpret body language is a key tool in life and business. Classed as a science, it’s studied and analysed, in order to read subconscious clues or ‘tells’ that others may be giving off.

There are numerous books on the subject explaining how to decode behaviour, identify when people are lying, nervous, agitated – or when they are ready to buy. Professional poker players stake thousands of pounds on the twitch of an eye! Knowing what to look for in any of these circumstances is a useful tool, especially when trying to negotiate or seek the truth. 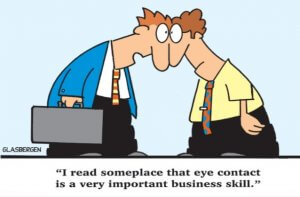 So in what ways can a person let you know what they are truly thinking, as opposed to what they are actually saying? ‘Tells’ can range from a flicker of the eye, to the entire posture of the body. The following are commonly accepted body language traits:

NLP (Neuro Linguistic Programming) has discovered that when a person is recollecting memories, their eyes (in most cases) will flick to the top left – that’s to access the area of the brain where memories are stored. When someone is lying (or massaging the truth), they tend to move to the bottom right of the eye. These movements may be only for a nano-second, but when closely studied and placed in context with the rest of their movements, a fuller picture may be formed.

When someone is uncomfortable or lying, fairly often the corner of their mouth may give an involuntary twitch – this betrays nervousness. There’s also the classic example of a ‘forced smile’ – which may not travel from the lips to the eyes. We’ve all seen people in social situations who appear to be smiling, but everything else about them tells you they’re uncomfortable. The mouth and lips may be tight and only partially open, rather than relaxed and comfortable.

‘Let’s make them sweat’ is a commonly used phrase when negotiating – and for good reason! When taken in context by putting aside exterior factors such as temperature (or running for the bus), sweat is commonly associated with nervousness – which is manifested through other human emotions and states of mind such as guilt or desperation. Patches of sweat, sweaty palms or how about a few beads of sweat running down a temple? It’s another useful way of gauging someone’s persona, mood or intent.

This is a classic posture commonly deemed a defensive stance, which is subconsciously used in order to keep distance or ‘hold cards close to the chest’. In a business meeting, it’s vital to keep arms relaxed, fluid and open. If someone folds arms midway through a negotiation or tense discussion, it is an early ‘tell’ that portrays defiance of the suggested terms or narrative.

A good firm handshake (whilst gently leaning in) is associated with confidence and openness. In comparison, a ‘limp’ or weak handshake is portrayed as such – a sign of weakness or being stand-offish. If the handshake is too firm and perhaps combined with further touching or an invasion of space, this might be viewed as too assertive – especially when meeting someone new and/or being sold something.

In general, an ‘open’ body language demonstrates comfort, confidence and honesty. A warm smile, a comfortable posture, fluid movements and relaxed facial expressions. Contrast this with someone who feels threatened, nervous or may be dishonest. What does their body language tell you?!

Use Body Language to Your Advantage

Body language is a fascinating enigma that can be used to your advantage in both personal and professional situations. Much of what we ‘say’ with our body language is instinctive or sub-conscious. However, by being aware of these ‘tells’ and making minor adjustments, it may be the difference between landing your dream job, large tender or simply dealing with an over-zealous salesperson!

If you can't find what you're looking for... please contact us